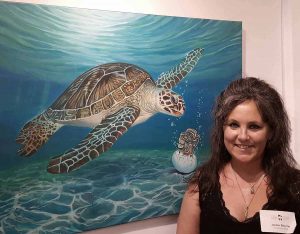 Jackie Bourne at Painting on the Edge 2016 Opening Reception

Me beside one of my paintings,Timekeeper, at Painting on the Edge, a juried international group show at The Federation of Canadian Artists Gallery, 1241 Cartwright Street at Granville Island in Vancouver, BC, Canada. On display until September 4th, 2016.

Sea turtles are one of the oldest creatures on the planet. This fascinating animal carries with it all of the secrets and knowledge of time. The Ancient Mayan civilization held it sacred and related to the Sun, the Moon, the Stars and the Underwater world.

The Maya predicted (using the Mayan calendar(s)) that the winter solstice on December 21st, 2012 would be a time of change; a new beginning of awareness and discovery for humans, towards each other and the natural planet. The Mayan calendar is integral to this prophecy of rebirth. The time carrier at the center of the calendar which seen here in this painting has been a longstanding Mayan symbol of the progression of time. Its’ breaking free from the egg symbolizes this rebirth of time, consciousness and change.
This painting was inspired by some time I spent snorkeling in the Mayan Riviera in 2012, where Loggerhead Sea Turtles swim freely and elegantly through the light turquoise clear water and warmth of the Caribbean Sea. Having observed these beautiful creatures in their natural habitat, watching them swim with such agility, gliding through the water and unaffected by time was the conception of this piece.
In this painting, the turtle’s close proximity to the timekeeper hatching from the egg could symbolize our own perception of new beginnings, new times, a new world and how we perceive time itself. It’s real, it’s ethereal, it’s in us, it IS us. It connects us to the Universe. It’s outside of us as well as in. We ARE the Universe.
Carlos Barrios, Mayan elder and Ajq’ij (is a ceremonial priest and spiritual guide) said in reference to December 21st, 2012: “The world will not end. It will be transformed.
This is the time in-between, the time of transition. As we pass through this transition there is a colossal, global convergence of environmental destruction, social chaos, war, and ongoing Earth Changes.”
He goes on to say: “Humanity will continue, but in a different way… We are living in the most important era of the Mayan calendars and prophecies…There is no time for games. The spiritual ideal of this era is action…
…The greatest wisdom is in simplicity. Love, respect, tolerance, sharing, gratitude, forgiveness. It’s not complex or elaborate. Find your heart, and you will find your way,” he concluded.